I am a Sirius subscriber since 2004. I listen to music mostly when working so I had an external satellite antenna hooked to a Kenwood DT-7000S receiver but last year I moved to a new house where this hook-up is not as easy because of the distance between the antenna and the audio system. Until I could find a solution I used the Sirius Internet Radio but this is not a really satisfactory system for various reasons – not been able to see the name of the song/artist; having to click on the renew button each hour; and, as always, mostly incompetent ISP.

I wanted to move back to a pure satellite solution, especially because there is already a DirectTV antenna which is oriented in the exact correct direction. It was easy to install the Sirius antenna in the same mast, without annoying the neighborhood association. 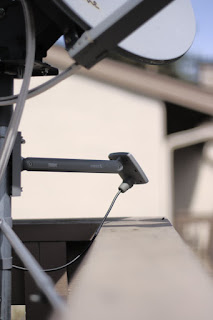 The next step was to find a way to send the audio over my home network – I have Netgear powerline adapters in most rooms of the house. The plan was to build an RTSP server with VLC, so I could listen to the radio on-demand, without having to continuously broadcast on the network. Multicast would have been a nice solution, but without managed switches that can direct the audio stream on the right Ethernet ports, the network would have been overwhelmed.

The satellite receiver has an optical output, so it does not make sense to convert the satellite signal to analog, to sample it back to digital in the streaming server. So I found at Fry’s this cheap USB sound device that has an optical S/PDIF input.

My first idea was to reuse a Mac mini which was already in the same room than the satellite receiver, but I then discovered that VLC on Mac OS cannot use the sound input of the computer. So plan B was to use a SheevaPlug. The Linux Unbuntu distribution used by the SheevaPlug was not working for some reason, so I installed Debian on an SD card. Alas, now the USB sound device was not working, probably because of a bug in the USB implementation. Inserting an USB hub between the device and the SheevaPlug solved the problem. Finding the correct parameters for VLC was not easy – for example I had to look at the source code to find that the URI to use the input port is “alsa://”. I also had to try multiple codecs (OGG was not supported by the RTSP implementation, MP3 was using more CPU than available) until finding that the A/52 (aka Dolby AC3) codec was perfect for this as VLC is using less than 8% of the CPU to stream a stereo channel at 256 Kb/s with a sampling rate of 48 Khz. Here’s the command line to start VLC:

I would have preferred streaming over IPv6, but VLC does not seems to support this yet. I also use VLC on my desktop to control the audio stream, coupled with Jack to mix the audio from other audio sources. The URI I use is “rtsp://192.168.2.156:5554/sirius”, and I can pause and stop the stream.

So I now have an uninterrupted audio stream from my favorite satellite radio channels directly to any place in the home. One thing I lost is the possibility to change the channel remotely. The plan was to add a USB to serial port adaptor between the SheevaPlug and the satellite receiver (so the intermediate USB hub was necessary even if the USB sound device was not buggy) to drive the receiver, but unfortunately I was not able to find the RS-232 protocol for this. The only reference I found is in a Crestron module but $256 is expensive for a piece of software that I am not even sure to be able to reverse-engineer. Having the protocol would also have been nice to send the current song information in the audio stream. I would be interested by any information on this protocol as long as I do not have to sign a NDA. Perhaps there is someone in the Valley with a working RS-232 connection like this and who will be willing to let me record the signals exchanges. As always I have a plan B but that’s a painful one, to say the least.