I am working on an experiment on how I can reduce to the minimum the things I have to carry with me when I am out of the house. I successfully reduced the size of my wallet to 90mm x 66mm x 17mm. Keys are one area I still have to improve, but I focused mainly on the smartphone, which is the third item I have with me when traveling. My current smartphone is a Nexus One, and my first goal was to integrate it as much as possible with my car.

For a long time, I used a Motorola T505 speakerphone, which, in addition to the normal speakerphone feature, also contain an FM emitter, which gave me the possibility to use the Nexus One as an MP3 player (well, I use only OGG files – another advantage of the Android phone – so that would be an OGG player). This was working fine, and I will still keep my T505 to use in rental cars when I am traveling, but there was some limitations: I had to remember to charge the T505 from time to time (although I used it for the whole nine hours of driving between Saratoga and Las Vegas), I had to remember to connect it and disconnecting it, but the worst, especially on long travel, was the low quality and the need to periodically change the FM station. 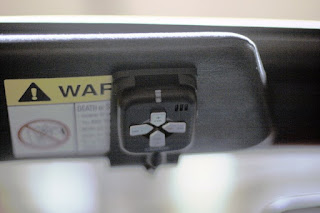 So the goal was to have a better sound and a better integration in the car. After some research I decided to buy a Clarion BLT370. This is also a speakerphone but instead of having an integrated speaker, it has audio connectors to connect to the auxiliary input of the car’s audio system. It is also powered directly by the car battery, so there is no need to remember to charge it. Also the Bluetooth automatically disconnect when stopping the car engine and, more important, automatically tries to reconnect to the Nexus One when the engine starts, which is perfect, as I do not even have to remove the phone from my pocket to start playing music or receiving phone calls. 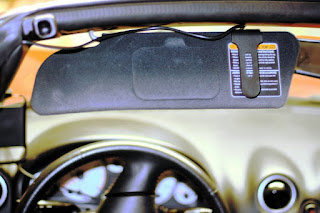 One of the potential problem was that now a cable had to go down the windshield, but fortunately I was able to hide it by running it inside the piece of plastic on the left of the windshield. Excepted that I need to be a bit more careful when opening and closing the softop, the integration as perfect as possible.

Now the next problem was that even if the Clarion had connectors to connect to the car’s audio system, the audio system in a 2004 MX5 does not have auxiliary audio input (that was before the iPod, I guess). 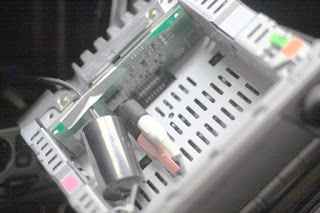 Luckily, other people had the same issue, and I found this terrific product, the Sylfex AuxMod. This card can be installed in the slot that is normally used for the tape player. The picture on the left shows the card installed, with the ground loop isolator required to eliminate a clicking noise. With this the sound is exceptionally good, so good that I decided to buy a 32Gb SD card for my Nexus One, rip again all my CDs in 256 Kb/s OGG files, and keep them only on my Nexus One. Now instead of playing music from my desktop computer, I play it from my Nexus One, comfortably installed in the Nexus One Desk Dock, at least until I configure a direct stream between the Nexus One and my desktop computer. 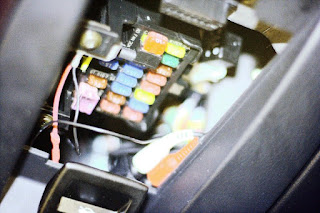 The last step was to connect the Clarion to the car battery. I did not want to do any irreversible modification in this car, so I used a Add-A-Fuse thingy, and some Velcro to keep the cables from falling on the driver’s feet. 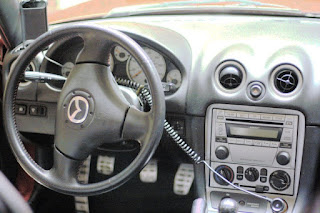 I also installed a Nexus One Card Dock, but I do not use the integrated speakerphone, just the charging function and the ability to keep the Nexus One keep in a position easily accessible when using the GPS (the GPS turn by turn instructions are send to the audio system through Bluetooth and the Clarion transceiver).

The next step will be to find a good replacement for the cable used to charge the Nexus which, as can be seen in the picture on the left, is not really well integrated in the car. The difficulty is that although is is easy to find a cable that connect to the battery for mini-USB connector, it is not for micro-USB connectors like the one on this car dock. The only one I could find was on a web site in England.