I have an insane number of bricked WRT54GL boxes lying around, and I needed to fix them for a project. The first step was to find a way to unbrick them, which means to use a JTAG cable. Nico (whom I probably do not credit enough for his help on all things geeky in this blog entries) pointed me to the Universal JTAG.

It was not easy to find the correct pins to use (the best page I found is in French, but the pictures are good enough to be used by everybody) but after soldering a connector and trying various combinations (only the buffered mode worked for me and, yes, the n_SRTST cable must be connected), I finally managed to unbrick the boxes. 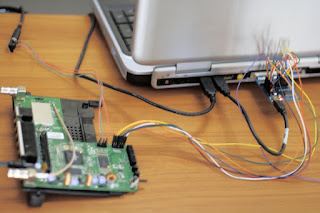 As the boxes were already open, I also wanted to add a serial connection for the console, as my future project will require messing a lot with the network configuration of this boxes. There is various ways to add a serial port to this boxes, but all require to make some kind of circuit board to convert the TTL 3.3v to the RS-232 levels. I found an easiest way by using a USB RS-232 to TTL converter that I already used in a previous project. The perfect cable would have been the TTL-232R-3v3-AJ but unfortunately it was not available at the time, so I bought a TTL-232R-3v3-WE and soldered a 3.5mm male jack. The next step was to solder a female jack to the WRT54GL, as shown on the following picture. 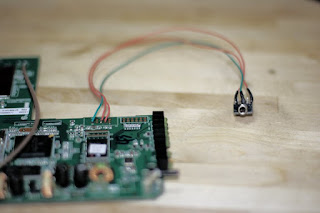 Now I just have to connect the USB cable to the broken box to fix the network parameters. 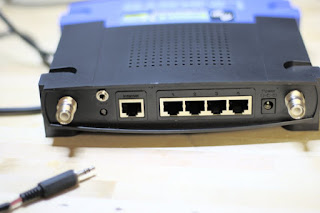 Total cost for adding the serial port: $2.50 per box for the female jack, $20 for the USB converter.

One thought on “JTAG and Serial Ports for WRT54GL”